This quickstart aims to guide you through the process of setting up a continues integration and delivery/deployment pipeline for a Magento 2 shop, using Bitbucket as our CI-system. For simplicity reasons, we'll only focus on one environment: Staging.

Before starting, make sure you have the following requirements setup correctly:

As a best practice, we'll generate a SSH public/private key pair that we solely use for deployments:

Generate a key pair without passphrase:

First, go to Pack > SSH Management > Add SSH key and add the key you just created. As a convention, name your key [projectname]-deploy. Make sure you don't include any key prefix, like ssh-rsa.

Go to Pack > SSH Management and filter down the server name and SSH key.

Add the key to your server by checking the box. To verify that the deployment key is added, you can also SSH into your machine and search for the key name in the authorized keys file:

Go to your Bitbucket repo and then to Settings > Pipelines > SSH keys. Select "Use my own keys", so we can add the deployment key pair we just created.

Copy both the private and public key from your deployment key pair, paste them as is (modifying the contents could result in "invalid key format" issues), and press Save key pair. 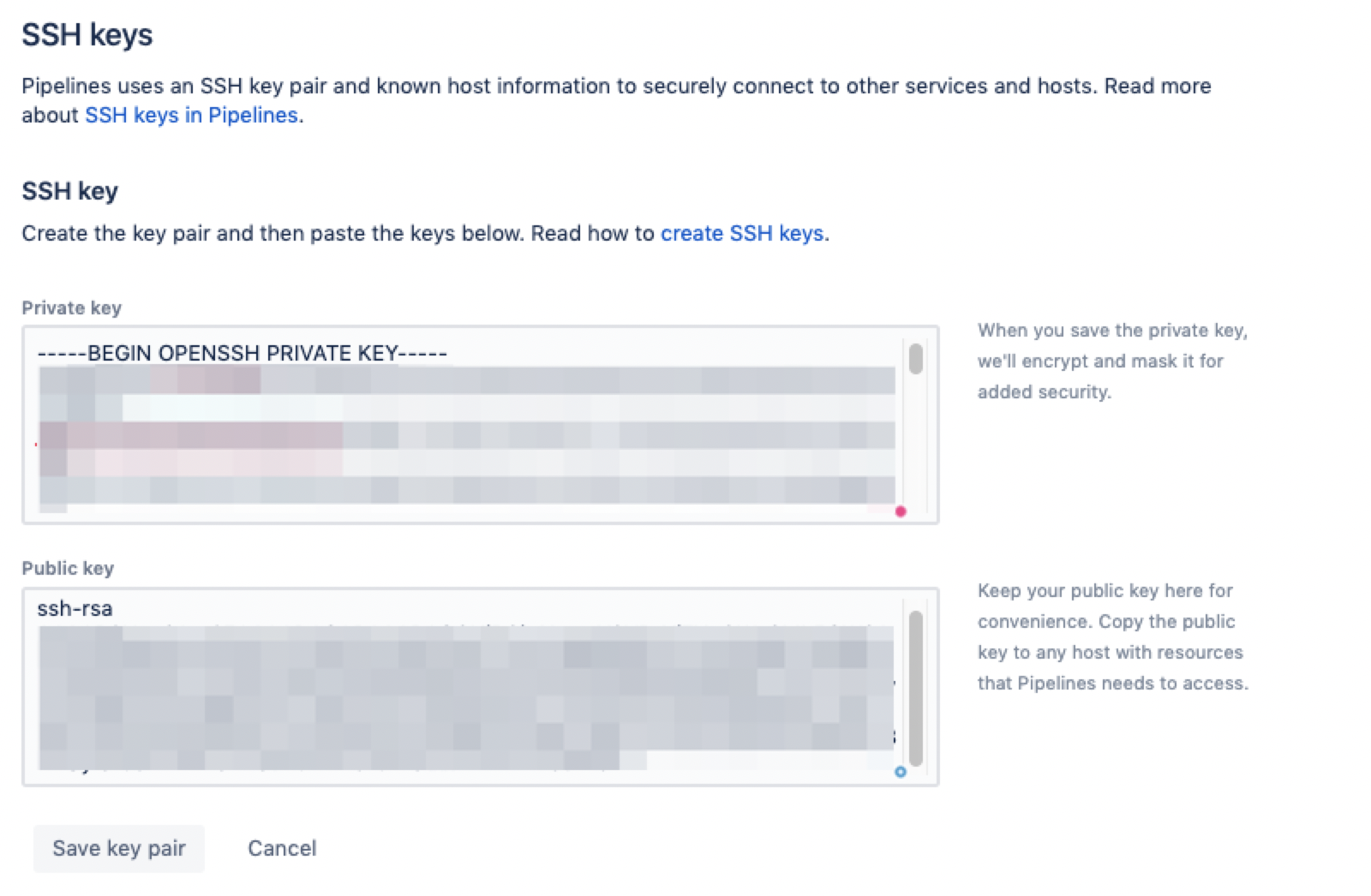 For a successful pipeline it is important that the neccesary configuration from the Magento Admin is exported to files, because we can't and do not want to have database dependencies / connections within a CI pipeline.

Use the following command to dump the configuration to files:

Read more about dumping Magento configuration in the devdocs of Magento.

Now we added and configured the deploy key, it's time to setup the deployment configuration using "configuration as code". We just need a deploy.php file in the root of the project.

Optional: to get code completion for your deploy configurations, add the Hipex Deploy Configuration composer package as a development package to your project:

You can either start from scratch with an empty deploy.php file, or use one the starter templates and continue from there.

The configuration for just a staging environment could be as short as this:

Now we have to provide the files and folders that don't change per deployment and thus will be shared over multiple deployments.

Common examples of shared files are configuration files such as .env, env.php and config.php. Often, those files are not under source control and might be generated / composed by the application or CI/CD system.

Now it's time to add our build, deploy and after deploy commands.

And the following deploy commands:

For Magento 2 your first build will fail due to missing configuration. Login to the server and depending on your project file edit app/etc/env.php or app/etc/local.xml. You will find these files in ~/domains/<domain>/application/shared/.

Now it's time to create your CI configuration file. You can either start from scratch or use the Hipex Deploy Bitbucket configuration starter template.

Choose a version of the hipex/deploy image that best reflects your application needs. Here's an example of a bitbucket-pipelines.yml file that uses the PHP 7.3 + Node 13 flavor and is configured with a configuration for the staging environment, containing a build step and deploy step to perform the deployment to the configured staging server. It uses the configuration provided in deploy.php to perform the steps.

Now that we're done with the project configuration, we can test the configured Build and Deploy steps locally before committing and pushing to the remote Git repo. Because we don't have to wait for the Bitbucket pipeline result this will reduce the time of the feedback loop drastically. You'll need to have a Docker client setup in order to test your build and deployment locally.

Run the hipex-deploy build command locally. We assume that the private key of the earlier created deploy key is located at ~/.ssh/id_rsa_myproject_deploy, and that is has access to the main Git repository, private packages and the SSH user. Keep in mind that the provided SSH_PRIVATE_KEY environment variable needs to be base64 encoded.

Because all hipex-deploy commands are implemented as Symfony Console commands, we can append the build command with a flag to determine the verbosity level, like -vvv to display all messages. This will be useful to debug any errors.

Just like the build command, we can also test the deploy command. For this example we first set the environment variables before using them in the command.

Now that all project configuration is done and we verified that both our build and deploy commands run locally as expected, it's time to commit and push both the Hipex Deploy configuration (deploy.php) and CI configuration (bitbucket-pipelines.yml) to the remote Git repository.

After that's done, Bitbucket will automatically trigger the pipeline as configured. The only accepted outcome is a pipeline that completely succeeds!